Bob Fisher was looking for a local business to build a shed on his Carboor farm – he found Buffalo Built and is glad he did.

Bob called in to the Murrell Street, Wangaratta, headquarters and gave the height and bay sizes he was after – and stipulated he wanted a gable roof.

Although initially thinking the quote was a bit much, he soon found out the steel prices were increasing.

“It was only going to get dearer,” he said.

“And the prices have kept going up since, so I’m glad I got in when I did.”

“Cows are dearer than sheds nearly,” he laughed.

Bob already had a few sheds on his property, but they were either full or in disrepair.

“I’ve got an old shed that’s no good and too dangerous to get up on it and fix.”

It was time for a new shed.

“I’ve got a heap of stuff that’s sitting there that needs to get out of the weather.”

Bob said the installation went smoothly and he was happy with how it all went.

“The hardest part to deal with was council, so I’m glad I left that up to your office,” he said.

He said John did a great job sorting out council issues. 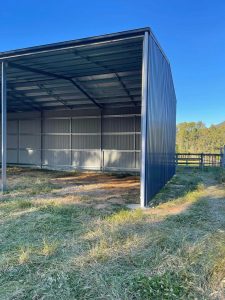 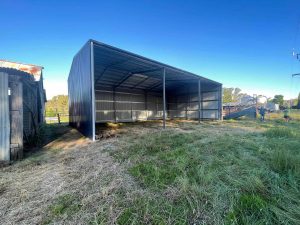